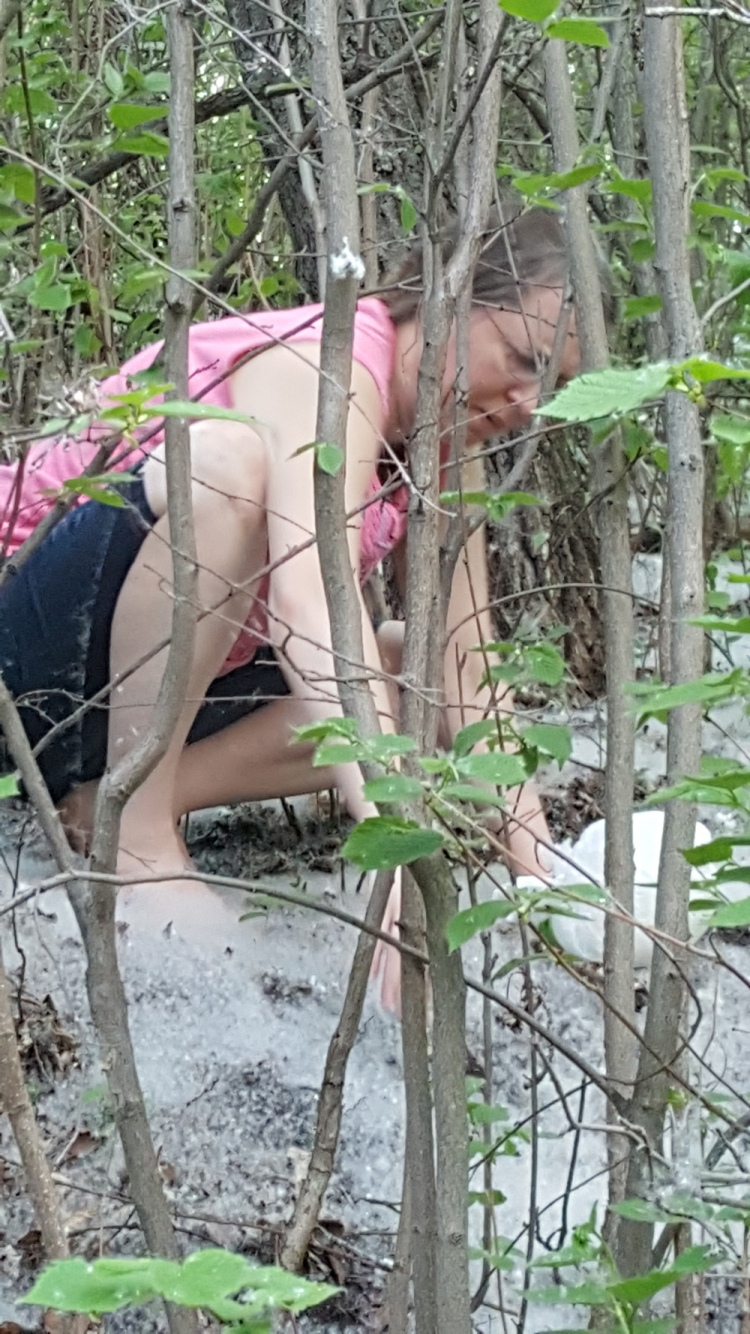 The fluff of the poplar trees is starting to fly like snow. So on Saturday evening, I went for a walk in the ravine to see if it could be collected yet. There was one section up on the hillside above the path that was covered in 1 – 4 inches of poplar fluff seeds. Beautiful. Peaceful. 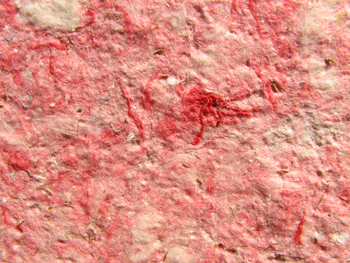 Now you might wonder why I am collecting it. You see, one of my favorite papers (see the image of poplar/ red denim paper on the left) to create has poplar in it. Therefore, every year I watch for the opening of the poplar seed pods. Some years it falls in thick banks of fluffy “snow” that I can scoop up the top layer and avoid the dirt and debris below it – like this year. Some years the window of time between rain storms doesn’t allow the fluff to fly much. Sometimes we get a heavy frost and the pods fall to the ground before opening. On those years I have collected the unopened pods and hope they open up in a paper sack, which sometimes works.

It has been so dry this year I was wondering if the pods had enough moisture to grow. Some did, some shriveled up on the branches. Collecting the fluffy "snow" has its own challenges. I had to remember how I had done it before. The first handful is fine. The second handful goes in and the previous handful wants to fly free of the bag again. So if you were watching me, you would have seen as much fly out of the bag as I managed to put in, until I remembered to start squeezing the fluff together in my hands, giving it more substance and weight. The fluff itself has some oils in it, which I could feel as I squeezed it together.

This is all a part of the process of creating for me. I love the walks in the woods to find the fluff with which I make paper. It is peaceful. There are certain times of year I collect each one and a part of me is watching and waiting for it. I watch and observe the signs. This is the season for the fluff and I would have missed it if I was going by the calendar. It is usually not out until June.

Over the summer, I take note of where the fireweed is blooming, so that I can collect it late August or September when the seed pods are beginning to open. Likewise, I know where the long thistles and the short thistles grow, where to collect some cattails, and "Old Man`s Beard." 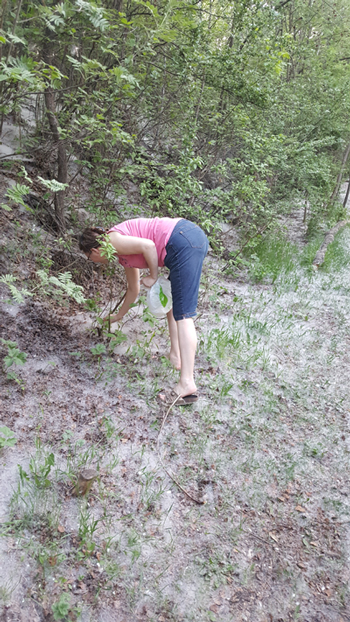 I am always on the lookout for other "fluffy" plants when I am out walking. When I see one, a curiosity rises in me to wonder what kind of paper it would make. And I think of the possibilities of what I could paint on that  paper. I also think of a painting idea and go gather what I need to create the paper I want to work on. (I did that for this painting, Out of the Believer's Heart - I had to make a lot of onion skin paper for the dry land portion.)

When I was a young mom, I came across, or was given, a devotional book with a title something like "The Raspberry Kingdom." The author used the arduous task of picking wild raspberries as a metaphor for her own walk and relationship with God. I resonated with her. It gave me words for what I felt when I would go collect the wild logan berries (blackberries) along the trails in Eugene Oregon or the fruit in the wild, old orchard on Beacon hill in Spokane. And I think about it now as I collect various seeds for papermaking.

It is an arduous task, sometimes full of thorns and uneven ground. It takes energy and time, but the reward is great. Is it worth the reward? For me, it is like working and walking hand in hand with God the Creator. He shows me little metaphors – of the trials and tribulation on a small scale with a reward puts in perspective the larger scale of life. I think about the birds of the air and the flowers of the field, (Matt 6) and God the Father who cares for them, and who also cares for me. I find peace and quiet when I walk the trails. I talk with God about whatever is on my heart, and I listen. It is a place and time - that is about just learning to "be," to live in the moment.

I feel a deep satisfaction, when I make the paper from the gathered seeds; when I try out a new seed paper; And when I take it further and begin to create a painting from the paper I created. It is all a part of the process of making paper.

I also look forward to sharing the findings with those who come to make paper with me. I think it is interesting and probably speaks to our culture when a student asks where I was able to purchase the fluff I had collected. Have we spent too much time apart from nature and God’s natural kingdom, his creation?

I challenge you to go for a walk in the woods, or natural setting near you this week. Look around. See what treasures you can find in God’s creation and listen for the metaphors God reveals around you. Then tell me about it. I’d like to hear your story.

The Fun of Papermaking 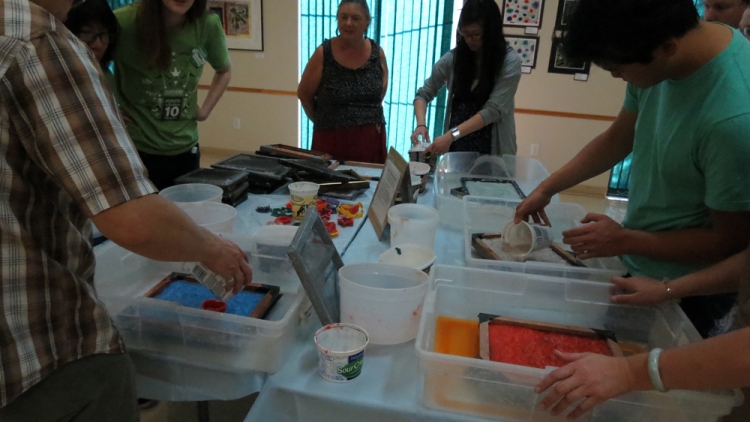 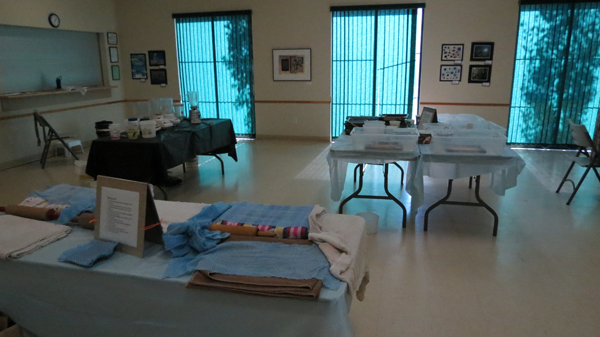 At Kaleido Arts Festival in September, I taught the papermaking workshop again. This was my eighth year! It is a privelege to be asked to come back every year and a fun festival to be a part of. I actually remembered to take some pictures this year. 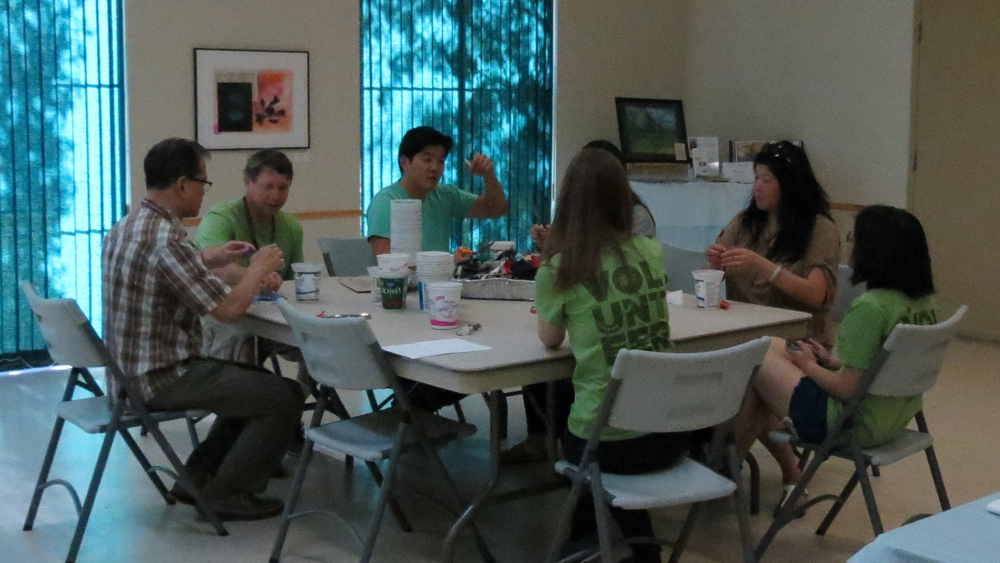 It is all set up so people can come make one piece of paper to take home with them.

We were set up in the  fellowship hall of St Faith Anglican Church.

Here is part of the set up and next is the other part where the group is beginning to tear paper, cut fabric and add natural fluffs (cattail, thistle, fireweed, down feathers, poplar fluff were some of the choices). 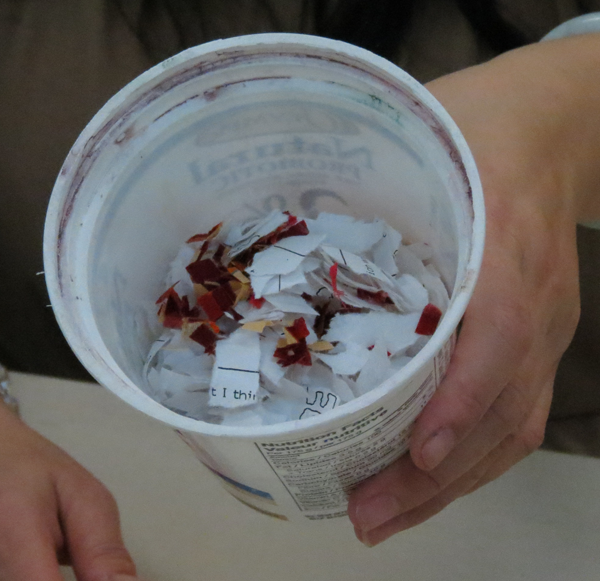 In the yogurt container on the left, you can see the small torn bits. of paper and fabric. 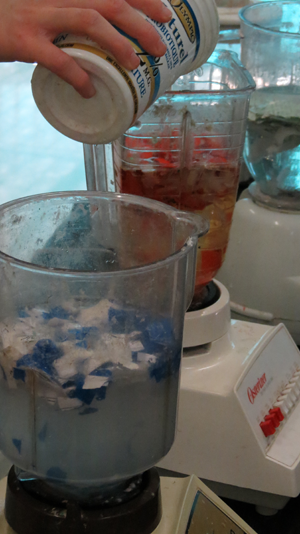 The next step is to take it to the blender station, where the bits are loudly chopped up and the paper pulp is made. 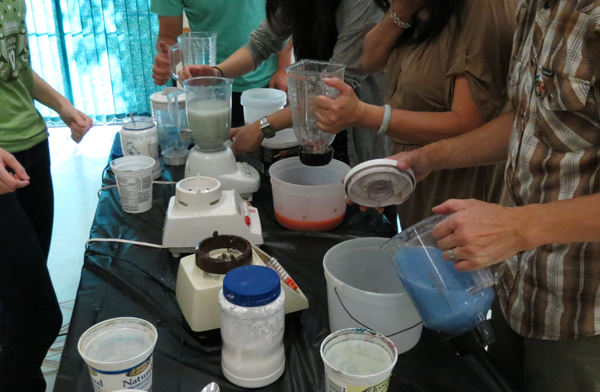 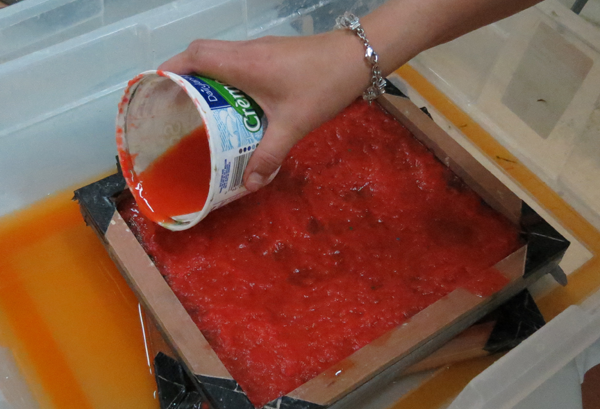 Once the pulp is made, it is taken to the next station where it is poured onto screens. 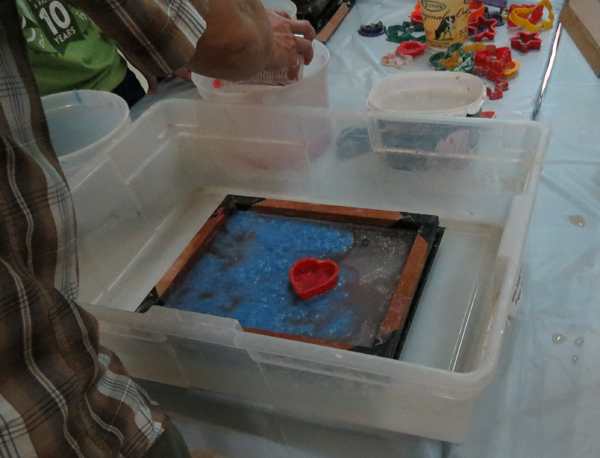 Last is the process of getting it off the screen so it can be taken home. 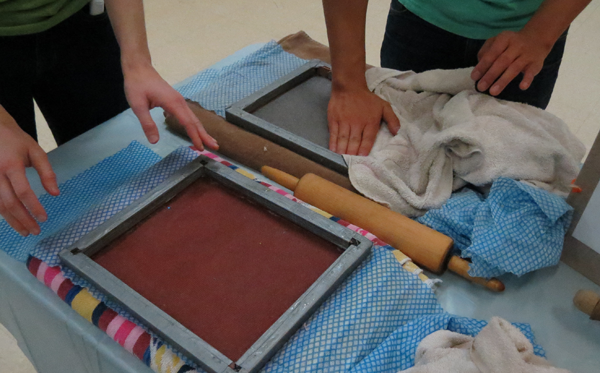 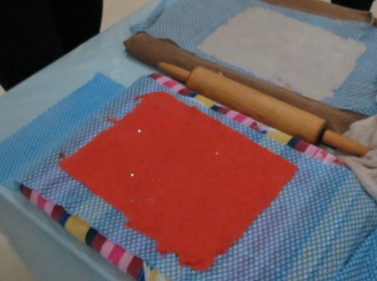 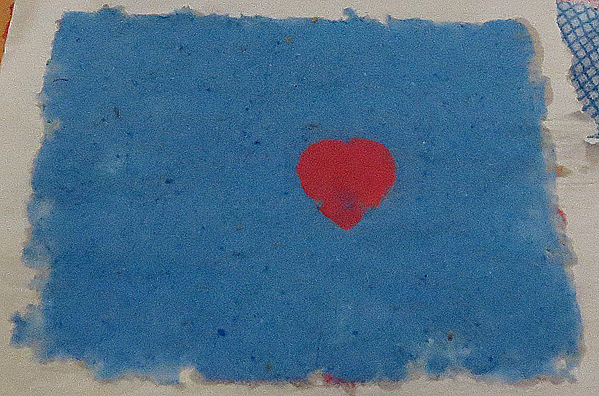 Look for my next workshop in the late spring or summer.

I teach another workshop on papermaking, an all day workshop. The students in the workshop will make 10-15 unique pieces of paper to take home with them.

I provide all the supplies, as mentioned above as well as pressed leaves and flowers that can be added.

Come and have a fun workshop with me!

(Next workshop Nov 12 at the Paint Spot) 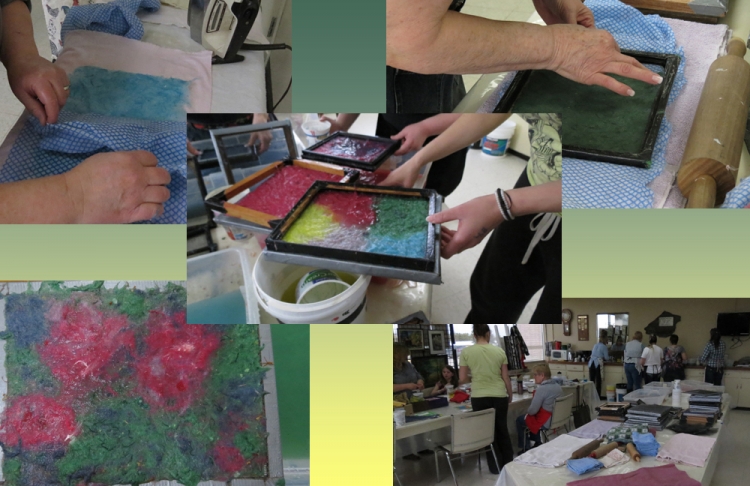 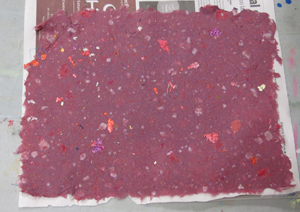 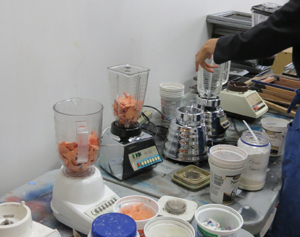 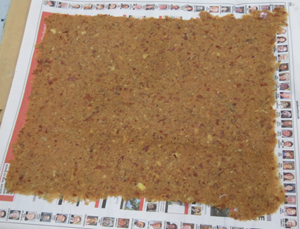